The Valpolicella climate can be generally classified as a continental or sub-continental one, but it is influenced by various geographical factors which create different microclimates, especially near the hills. In certain cases, with southern exposures and a relative nearness to Lake Garda there is a microclimate that can be defined as sub-Mediterranean, with flora and fauna more likely to be found at lower latitudes. The presence of a large water mass, like that of Lake Garda, causes temperature mitigation: it tends to mitigate both minimum winter temperatures as well as maximum summer temperatures.

This effect decreases by moving away from it. Thanks to the orography of the valleys, oriented in a south-north direction, air masses can move along the slopes, especially when strong southern winds blow. This influences the climate of the area in terms of temperature and rainfall.pendii, specialmente quando soffiano venti meridionali: questo influenza il clima dell’areale per quanto riguarda la temperatura e le precipitazioni. 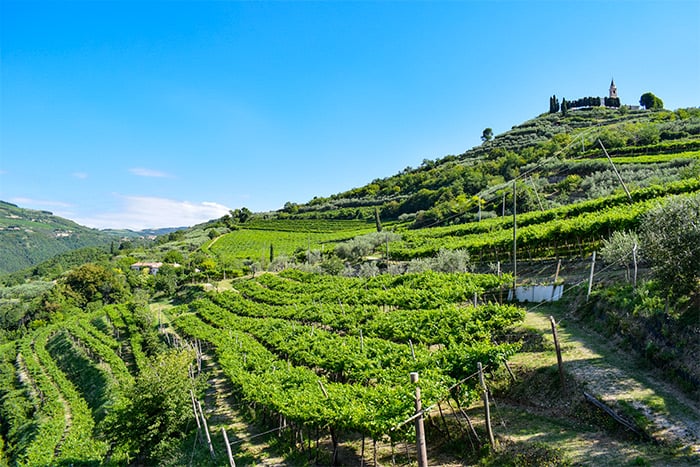 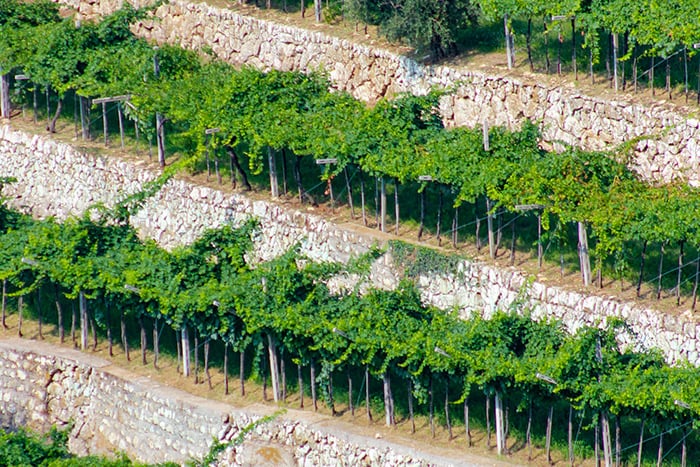 Despite having sub-continental climate parameters, it is noticed that the minimum winter temperatures are very low only in lowland areas, while slightly higher in the hilly ones. The higher elevations are characterized by lower values of relative humidity, and consequently, the temperature trend is inverted. During summer, the temperature is always lower in hilly areas than in lowland ones, this especially occurs at night when the mountain breeze struggles to reach lowlands, where the sultry heat lasts for many days also at night.

In winter, when the centre of the high-pressure area is situated on the Alps for several days, it occurs a temperature inversion, so there is a layer - that does not normally exceed 150 metres - with low temperatures, fog, high relative humidity and heavy pollution (smog). Over this layer, the sun shines, temperature is warm, and the relative humidity is lower.

The annual rainfall amount is between 900 and 1100 mm. The rainfall tends to be more heavy moving from lowlands to the mountains: in the hilly areas, the precipitation quantity is one third higher than in the lowlands, whereas on mountains sometimes twice as much. The annual amount is mainly due to abundant summer rainfall, but also in autumn heavy rain events may occur thanks to the Sirocco wind. Usually, the heaviest rainfall in Valpolicella is brought by southerly winds, especially when a low-pressure occurs over the Gulf of Genoa, drawing warm and moist air from the Adriatic Sea. It is not uncommon for some events to exceed 100 mm in a single day.

Sometimes, in Valpolicella during heavy summer rains, there are also hailstorms which can be dangerous for vineyards.

Frosts and snowfalls in Valpolicella are getting less frequently due to the global climate change. However, in some areas, for example where a valley becomes very narrow near the mountain, there are very special microclimates: it can snow heavily, while all around, even at higher altitudes, it rains.

Breezes influence the wind regime in Valpolicella: the valley breeze during the day, and the mountain one at night. The speed of the breezes increases from lowlands to the hills, exceeding 30-40 km/h along ridges, especially during summer, when the daily temperature variation is high.

Particularly important for Valpolicella is the Sirocco wind, a warm, humid southeast wind that brings abundant rainfall, especially in the hilly areas where this wind reaches a speed of 50-60 km/h. Another wind which is equally relevant is the Föhn, a dry, warm wind even in winter, which sometimes blows strongly from the North with gusts that can reach 100 km/h. Unlike breezes, this wind’s speed increases reaching lowlands.

Another significant wind comes from Northeast, it is cold and relatively humid, especially in the lowland areas. It’s not particularly strong even if it sometimes exceeds 50 km/h.